I had an 8.5 hour layover in Seoul, which was quite painful but a little bit less with the lounge access.  Asiana's business class lounge was pretty big and quite airy. I went straight to the shower area and found that I needed to first get the key from the receptionist, and I had to leave my boarding pass. There was a little bit of a wait but wasn't too bad. One thing that I found interesting was that all the workers on the floor wore jackets and skirts and looked like flight attendants, even those who were cleaning the tables and refilling the food!


The bathroom was nice and clean and had everything I needed. It was nice to be able to freshen up and get ready for the next leg of the trip.


After showering, I went and grabbed one of the booths with a chair massage. The chair was actually pretty good, and I liked the privacy from the booth and called Dan from there since it allowed us to talk more freely.


I saw a lot of people eating Korean cup noodles, and I found myself wanting one too even though I was still really full. :) But I caved in and got one...hehe.


I walked around the airport in search of dessert.  I actually had something in mind already which was the Haagen Dazs coffee ice cream with chocolate almond crunch. I was so proud when I actually found it. :) Yay!


After what seemed like a really long time, it was FINALLY time to board. :) I went to the gate and people were already lining up. It was interesting to see but the ground staff bowed before they started the boarding process.


I chose to sit on the 2nd floor, which I liked because it's very quiet. There's also a space next to the seat for small items - which I liked. 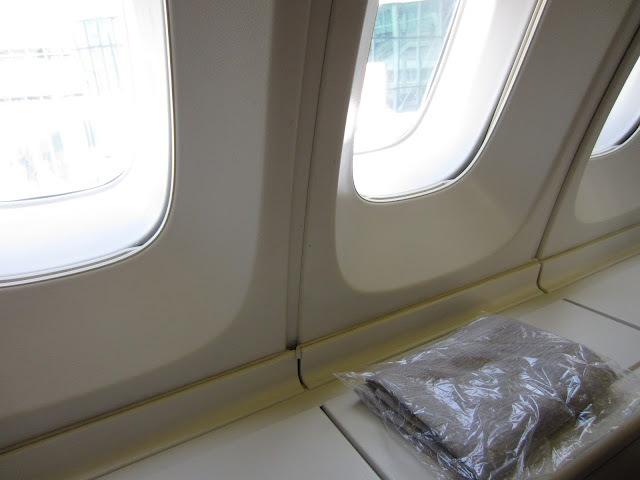 The seats looked a bit worn, but there was plenty of space and legroom. The seat did not lay completely flat, but almost. It was definitely still enough for a good night's sleep.

All the flight attendants were very courteous, and they actually changed outfits a couple of times which was interesting. They also bowed at the beginning of the flight, and then they changed into a more casual look and wore aprons during the food service. 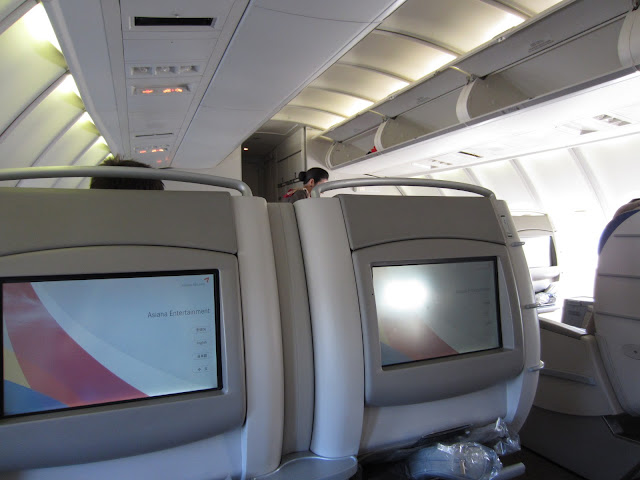 Menus were distributed, and there was an option for Western-style or Korean-style food. I was torn because I wanted the Western appetizer & dessert, but I wanted the Korean Ssambap. I asked the flight attendant if it's possible to do the mix & match, and she said she would have to check first. She later came back and said that would be ok.

I was impressed with how the food was served. Unlike the typical way of how food was served from a typical enclosed rolling cart, they actually served each course individually, and all the food was brought out on this see-through cart. I thought it was pretty cool. The first course was a bite sized fried eggplant which was served cold, but was pretty tasty.


The king prawn salad was also very small in size, but was definitely enough since I knew I'd be having a lot more food later on.


Mushroom soup is my favorite kind of soup and I really liked the soup that Asiana served. It was rich and creamy, just how I liked it!


By this point I was already quite full, but I regained my appetite after seeing the main entree, the Korean Ssambap. WOW! This was definitely the most extensive airline meal I'd ever had, and probably one of the best. I felt like I was eating at a real Korean restaurant. There was kim chee, burdock root, ssamjang sauce, soup, fresh veggies, and then the meat with rice.

I really liked the main entree, and it definitely didn't feel like an airline food. Mmm... I then had a couple bites of the cheese.


For dessert I had a choice of fruit or apple tart, and being unhealthy, I chose the apple tart...hehe.


I watched a couple movies and then went to sleep. I woke up in time for breakfast, and I was intrigued to try the banana loaf. I had never seen one served on an airplane; usually the breakfast choice is either croissant or muffin. The banana loaf was quite tasty, it was a bit darker and denser than usual but still very good, and served warm.


For the main breakfast entree, I tried the porridge which was a bit bland, but was good when eaten with the yellow pickle.


I landed in LA, and the immigration line was already quite long. I had to recheck my luggage to San Francisco, and waited for a couple hours at the airport. Interestingly enough, my "first class" domestic ticket did not allow me access to the United lounge. Strange, huh? So I just waited at the gate and grabbed some gossip magazines and snacks. It was my first time riding in domestic first class. But really, for such a short flight there was really nothing to write about. I was so tired I think I slept the whole way and didn't really think the flight was that memorable. :)

Finally, after two weeks in Asia and multiple layovers, I was finally back in the Bay Area.
It had been a really relaxing trip, and I was glad to able to go home to visit my family and friends. It was tough being apart from Dan for two weeks, but we somehow managed...lots of skype. :) Next time I'm bringing him with me though...hehe.

Going home to Indonesia is always an interesting experience, because in a way I feel like I have two homes. In a way, the Bay Area feels more like a home to me, but since my family is in Indonesia, that is also home for me. I guess I'll always have two homes!
Posted by Marcela at 8:34 PM